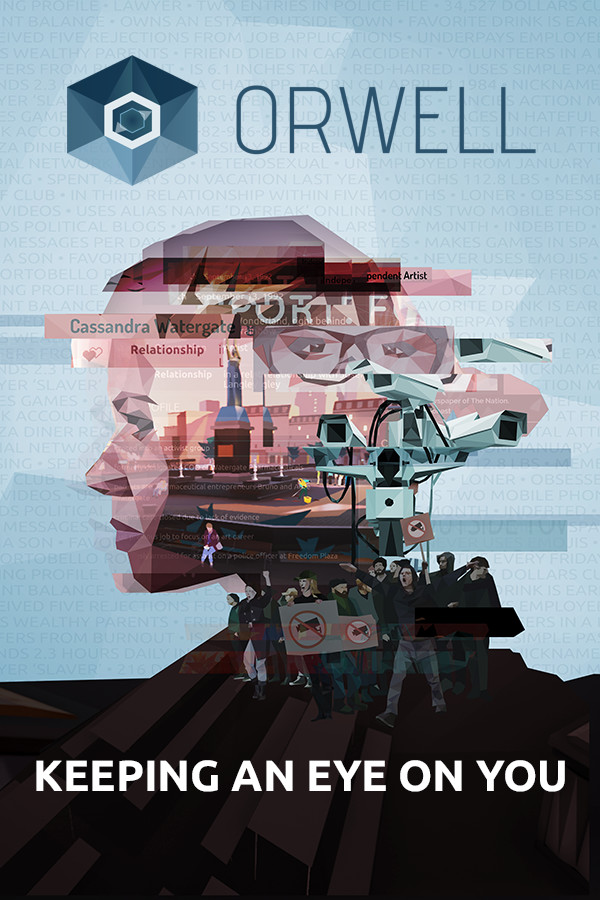 Briefing: A point-and-click, episodic "paperwork simulator" where you play a government employee trying to find the perpetrator of a recent terrorist attack. All gameplay takes place through a computer interface where you look through online posts and communications.


I think Orwell is, like, the only game that really properly addresses the paranoia of having FBI agents monitoring your every move online. Many games will sidestep this particular topic in some way by either making it a historical type of thing or go ACTUAL full-on 1984... Ironically, the game named Orwell actually keeps things a bit more grounded. I guess it helps that this game takes place in 2012 instead of some dystopian Earth 3000 years into the future. Either way, that makes it a real standout among the crowd!!

The game starts out by throwing you into the Orwell Surveillance System. This is a program (or operating system?) developed by the government that allows its user to spy on-- I mean, build profiles on persons of interest by accessing their personal data and online communications. You are the first researcher assigned to use this alongside your advisor, Symes, who acts sort of like a tutorial/narrator. Despite how that may sound, his place in the narrative does not feel unnatural in the slightest and I actually like him a lot!! Anyways, the way Orwell works is that you are given a suspect whom you gather data on by reading through online articles, social media profiles, and eventually your targets' devices themselves. You don't just get handed all this stuff for free though, as most information will get unlocked by discovering a specific piece of data and running it through Symes. This sorta leads me into how I enjoy the realism of this game.

The Orwell system has some, shall we say, checks and balances put in place so that the government can't go hogwild with spying on anyone and everything. Now, I mean, sure, in real life the NSA is kinda allowed to listen to our phone calls whenever.... but here, you at least need a reason and permission from people who need to get permission from someone ELSE to do that! Which is neat, and a step up from reality! You also need to gather enough evidence to go for an arrest instead of just deciding to go after someone on basic suspicion. Another thing that really makes this game neat is that it doesn't really make anyone out to be the bad guy. You, Symes, the "terrorists," and even the person responsible for the Orwell system are treated as regular people just trying to do what they think is right. Obviously the terrorists hammer home that anti-government message, but that's to be expected, you know? The game isn't trying to force you to feel a certain way about Orwell, but instead gives you all the information you need to come up with your own thoughts and feelings about the situation. Obviously the ethics of a tool like this are... iffy, but throughout your use of it you can see how it would potentially be useful as long as all the procedures are being followed. Oh, and did I mention you play someone from outside the Nation this tool is being used in? That's a whole 'nother can of worms!

Obviously, I have to have a little section about my nitpicks, of which I actually have very few. The only thing that gets me is the text message speed. Without any spoilers, this game has a Pretty Long text chain that precedes your final decision, determining your ending. I meant to replay this game, but I could really not be fucked to go through that conversation all over again. The first time it wasn't too big of a deal because I was also reading through some documents and webpages as the text loaded up, but even then I felt my patience faltering when all I had left was to wait for everyone to finish talking. The game allows you to increase the speed at which phone calls progress, but not text messages. Why not? I guess it's primarily to emulate the actual speed at which people type... which, again, is fine the first time, but not when it becomes a slog to get through. My only other complaint is about the ending itself and how abrupt it felt, but personally I don't think its such a big deal because the journey was more important than the destination in this case. The real payoff is solving the mystery of the terrorist attacks, you just get rewarded with a choice of what to do about it.

I kinda don't want to say any more about it- just go play Orwell! For a game that involves mostly clicking hyperlinks and viewing webpages, it's really a blast to play. Perhaps it has something to do with the fact that I already do "research" like this as a hobby. But perhaps it ALSO has something to do with the well-crafted narrative and focused character writing drawing you into the story this game wants you to tell.