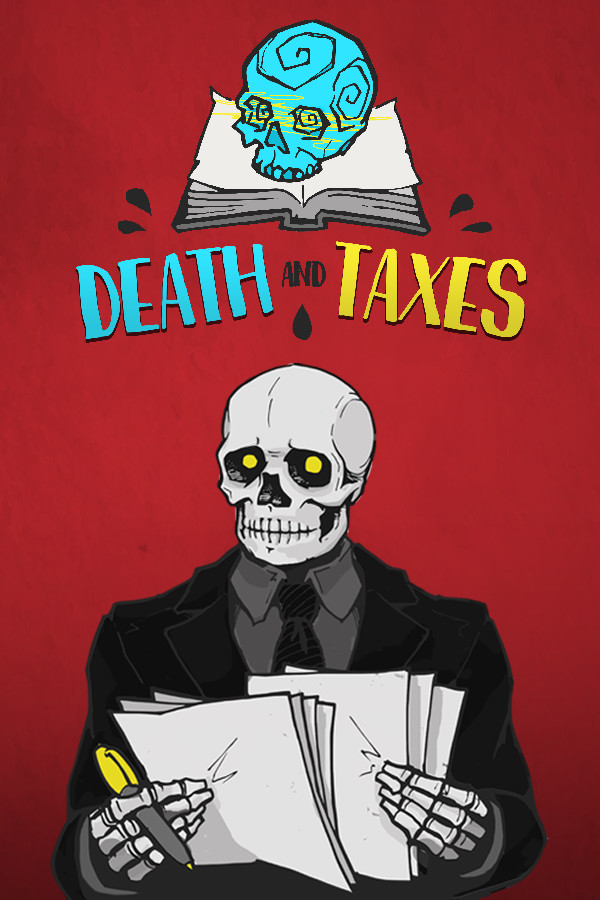 Briefing: A game where you play as a newly created Grim Reaper who, instead of swinging a scythe around, works in an office building and files paperwork.


There are a lot of spoilers in this review. You're not missing much, though…

“Paperwork simulators” are one of my new favorite genres of game to come out lately. I kinda use that term broadly to define games that give me the same feeling that Papers Please did, where you look through all this paperwork and pass some sort of “judgement” in the end. Death and Taxes carries on this fun new gameplay style, clearly having taken inspiration from Papers Please, but misses the mark a bit.

The paperwork sections of the game are the main and most interesting parts. Every day you are given some specific criteria to match as well as a number of profiles to review. You have a marker to mark who lives and who dies, and then you send the files off on the fax machine. After work, you can check out a shop that sells desk toys, cosmetics, and a few useful objects. There's also a bar that's open on weekends with people for you to talk to. To progress, you talk to your boss (Fate), he gives you feedback and chats with you a bit, and then you go to bed. There is some other stuff too, but that's the main gameplay loop. Work, talk to Fate, go to sleep, repeat.

This gameplay loop is fun for a while until you realize that you don't get a lot of wiggle room with which profiles you mark. Let's take this example: you have three profiles total. Your boss's note tells you that two humans have to die, and to spare anyone with an engineering background. Well, one of the people has an engineering background…. so it's pretty easy to tell which profiles you're supposed to mark. While the criteria changes over the days, you won't really be spending that much time deliberating over your choices, as your directions don't increase in difficulty or anything like that.

The other main problem with making choices is that you just stop caring about the people in these profiles. For the first week or so, you might have some slightly difficult moments. You'll have to spare a con artist or something, while a teacher who works in underprivileged neighborhoods has to die. However, over time, you just get married to following directions. Even if you are careful with whom you spare, there's nothing really telling you that your actions are making a difference. You have news reports, sure, but it doesn't feel like anything is actually happening in the world other than on minuscule individual scales. I literally stopped checking the news report in the last couple of weeks because it felt like none of it even mattered.

And the story… oh, the story. Basically, Fate becomes more and more disillusioned with his work and decides to doom humanity so that everyone (including the people in your office) would disappear. Before you get to that point, though, you get a lot of feedback from what I can only assume is a voice in your mirror. You get criticized constantly just for following directions, even on days when you make the best decisions within your power. I feel like part of it is supposed to be unclear foreshadowing and part of it is general anticapitalism... and I mean, I'm as much of a commie as the next guy, but it comes off more annoying than anything else. I mean, my character was created specifically to do this job—I don't really want to risk discorporation because I don't agree with it! You can't blame me for playing the cards I was dealt.

The other characters in the game are also just sorta... one-offs. Other than Fate and Mortimer (the shop keep). I like their personalities well enough, but outside these two, the other characters don't really matter all that much. They don't give you ANY knowledge, really, about your situation nor any hints. I also should probably mention that the voice acting for the characters is good, it's just that you start skipping through it soon enough. The characters take their time saying each line, and since you're just looking at text and a still image, the speaking sections are boring, AND occasionally annoying based on the character, especially since they don't change anything. It's a weird nitpick, I know, but maybe it's just 'cause I'm ADHD and impatient.

The game encourages replays to get a better ending, but personally I just could not care. I mean, I would like to go for a better ending, but considering how boring the general gameplay got and how much dialogue I was skipping, I cannot be bothered to put myself through that again. Also, I couldn't 100% figure out what the new lamp thing did, and I didn't feel like finding out because it felt tedious. I'm assuming it shows how your choices actually affect the world, but that makes it feel more like a management sort of thing I don't feel like dealing with. I'm here to work a fax machine, not to make sure all these numbers are balanced!!

Furthermore, I really don't like having to compare this to Papers Please, but it's so easy to tell they were inspired by it. What really gets me is like… this guilt-tripping the player. None of these games with the premise of "government employee works in a corrupt system” really lay it on as thick as they do here. Especially from characters that AREN'T the victims of your actions. I also cannot stress enough how the paperwork just isn't fun to do like it is in other, similar games. Papers Please have you checking a million different papers and a million different lines of text. Not Tonight does similar, and other info-checking games give you a lot to work with. This game gives you one profile per person with a bunch of useless information and a life description that doesn't even matter unless it's on Fate's note. These people are just statistics to the player, since you never get to see these humans interacting with you or even each other. It's crazy!

Sorry that I quit early, but I technically beat the game once, so I get to write my dumb opinion on it. Perhaps one day I'll go through and replay it properly, but that won't be happening as long as I still have a billion games from Itch.io bundles (and ULTRAKILL) to play. The thing is, I like the concept here, but the gameplay really quickly tires you out only to give you an unsatisfying ending.

You don't even do any taxes, either!